6th February 2018 – Oxford, UK: British parents are risking the privacy of their own children and families by openly sharing photos and videos with complete strangers on social media, according to new research released by Nominet to mark Safer Internet Day.

The latest Share with Care research found that over a fifth (22%) of parents of children up to 13 years’ old – the equivalent of over 2.7 million people – either have completely public Facebook profiles or profiles that can be viewed by ‘friends of friends’, meaning that they’re sharing their posts with total strangers. However, even those who only share posts with friends could unwittingly be sharing personal content with people they don’t know. On average, parents of children aged up to 13 have 207 Facebook friends, however 61% of parents admit that fewer than half are ‘true friends’ that they would say hello to in the street or socialise with regularly.

The findings come despite parents admitting to concerns around the repercussions of sharing images of their children online. Almost half (47%) are worried that somebody could steal these images and use them without permission, 42% are concerned that people they don’t know could see the photos, a quarter (24%) think their child would be unhappy about so many images being shared and 12% think they could undermine their child’s future application to a university or employer.

On average, parents of children aged up to 13 share 71 photos and 29 videos of their child every year to social media sites. This is a significant reduction since 2016, when Nominet’s previous Share with Care study found that parents were posting an average of 299 photos of their children on social networks every year. This may be a result of parents becoming more aware of ‘oversharing’, or a shift to sharing via private group messaging apps like WhatsApp.

But despite sharing fewer images of their children than before, parents still struggle to manage who can see them. Many parents still don’t have a good understanding of social media privacy settings, with fewer than half (43%) saying they are very confident at managing them. Meanwhile more than a tenth (13%) have either never reviewed their privacy settings, or have no idea how to do so. A further fifth (20%) haven’t checked them for over a year.

In a quiz on Facebook’s privacy settings, more than half of parents weren’t able to identify the correct answer in nine out of the 12 questions asked. Among the topics causing most confusion were:

More than half (51%) of parents never ask, or don’t feel the need to ask, their children if they mind their image being posted online, although almost a fifth (18%) say that they always check that their child is happy before they upload.

As well as photos of their own child, more than 6 in 10 parents (61%) are also posting pictures of other children online. In the last year, these parents have shared an average of 3.5 photos featuring other people’s children. Almost half of parents (47%) would always expect other parents to ask their permission before posting a picture of their child, with a further 31% expecting to be asked for permission depending on the context. However, a quarter (25%) admit to never asking for permission before uploading a picture of someone else.

When it comes to their own children’s use of social media, a quarter of parents (25%) allow their children under the age of 13 to have a Facebook account, 16% allow them to have an Instagram account and 13% allow them to be on Snapchat. All three services have a minimum age limit of 13.

More than a quarter (26%) of parents who let their pre-teen children use social media insist on knowing their log-in details, while 25% supervise how they use it. However, 22% worry that they spend too much time using it, and the same percentage (22%) worry about the impact it could have on their mental well-being. Only 13% of parents believe that social media is ‘harmless fun’.

Opinion is also divided when it comes to social media companies launching services specifically for children, such as Facebook Kids, though more parents are against rather than for them. While a quarter (26%) think they’re a good thing that helps children to communicate in a safer environment, a third (32%) think that they’re a bad thing, and that children don’t need to use social media at such a young age. More than a fifth (21%) think social media companies should be prevented from targeting children entirely.

Russell Haworth, CEO, Nominet, says: “Social media changes all the time, and to some extent we are all still learning about its pros and cons as it evolves. As the debate over the societal impact of social media grows, it’s reassuring to see that parents have started to heed warnings and reduce the number of pictures of their children that they post online. But we can still do much better, especially when it comes to understanding privacy settings and making sure that the posts we share are only seen by those we really want to. After all, you wouldn’t share family photos with strangers you bump into on the street, so why do it online?”

“The theme of this year’s Safer Internet Day is respect, and we’d like to see more British parents apply that to their social media lives by pausing for thought before they post. Social media can be a great thing, helping friends and family to stay in touch and share important moments – but it must be used in the right way to protect our privacy and particularly that of our children. That means checking privacy settings regularly, asking permission before you post content featuring other people and considering the future implications of everything you share.”

For a visual snapshot of the research see our infographic. 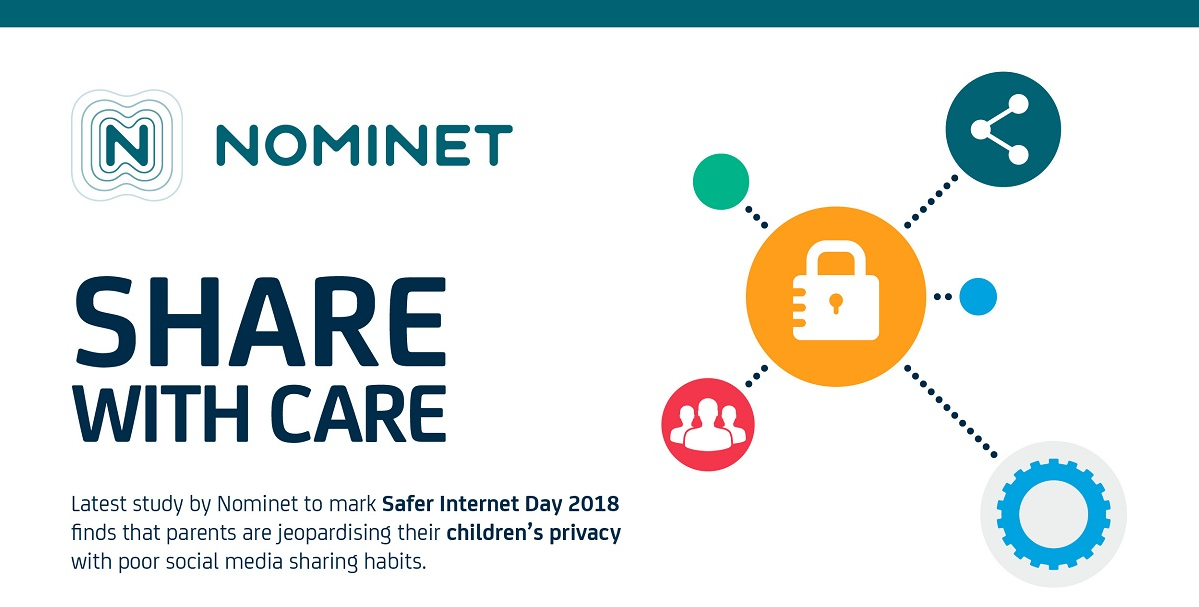 Nominet is driven by a commitment to use technology to improve connectivity, security and inclusivity online.  For 20 years, Nominet has run the .UK internet infrastructure, developing an expertise in the Domain Name System (DNS) that now underpins sophisticated network analytics used by governments and enterprises to mitigate cyber threats.  The company provides registry services for top level domains, and is exploring applications for a range of emerging technologies. A profit with a purpose company, Nominet supports initiatives that contribute to a vibrant digital future.