The criminality report shows that the number of .UK domains suspended between 1 November 2016 and 31 October 2017 has once again doubled year on year to 16,632, which represents around 0.14% of the more than 12 million .UK domains currently registered.

Russell Haworth, Nominet’s CEO says: “A key part of our role in running the .UK internet infrastructure is to ensure that .UK is a difficult space for criminals to operate in. The upward trend in suspended domains confirms that increasingly criminals seek opportunities online, but also shows how our cooperation with the law enforcement community and our expertise in network analytics helps tackle this problem thanks to the established processes and cyber security tools we have in place.”

The number of suspensions is an increase on the 8,049 suspensions over the preceding 12 month period. Nominet is now collaborating with ten organisations and received requests from seven of these reporting agencies including, for the first time, requests from DEFRA – Veterinary Medicines Directorate.  The Police Intellectual Property Crime Unit (PIPCU) which processes and co-ordinates requests relating to IP infringements from nationwide sources is the main reporting agency with over 13,500 requests (almost double year on year), followed by the National Fraud Intelligence Bureau (NFIB) and Trading Standards.

The number of requests that didn’t result in a suspension was 32 – half the number for the previous year. Reasons for domains not resulting in suspension include the domain name already being suspended by the Registrar or being transferred to the IP rights holder as a result of a court order in the meantime.

The number of suspensions that were reversed was 15. A suspension is reversed if the offending behaviour has stopped and the enforcing agency has since confirmed that the suspension can be lifted.

See the infographic for full details of the report. 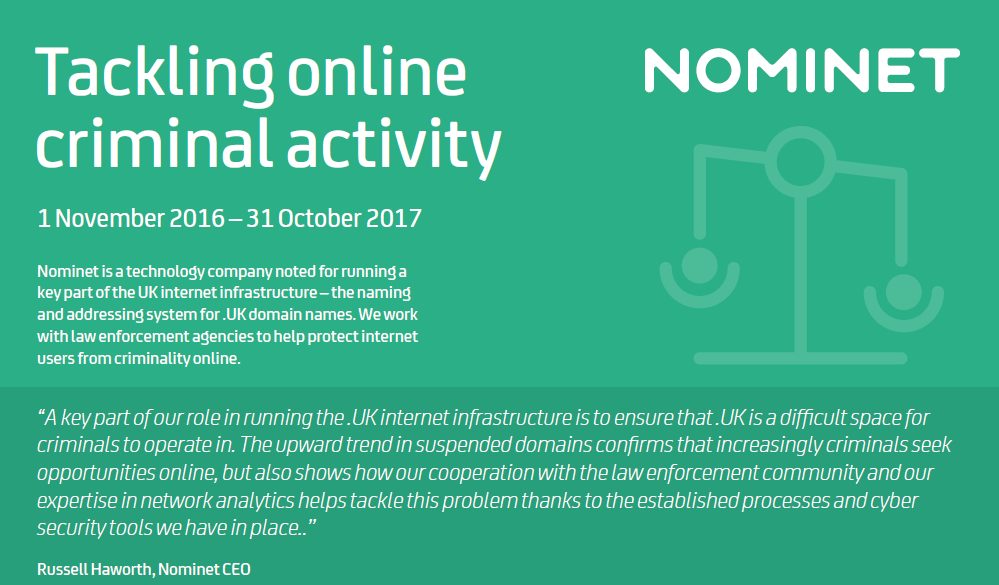 As trusted guardian of the .UK namespace there is also the Dispute Resolution Service (DRS) – Nominet’s award winning mediation based process for resolving disputes between parties over the registration or use of .UK domain names. It aims to provide a clear, quick and cost-effective process outside of the formal court system and is accessible and fair to both those complaining and domain name registrants. Furthermore, in October 2016 Nominet was appointed by the National Cyber Security Centre to run a Domain Name System (DNS) resolver service to help protect government and all Public Service Network (PSN) connected organisations from malware, phishing, botnets and other threats.