Healthcare spending in the USA – is prevention better than cure?

A new report from the Johns Hopkins Bloomberg School of Public Health confirms that the US healthcare spend per person is more than double that of other developed nations. Despite attempts to rein in costs, the system remains one of the most expensive to run and use.

The per head figure for 2016 was $9,892, with an average across all the countries considered ‘developed’ by the OECD coming in at $4,033. The nearest any other country came to the US figure was Switzerland, a country with a notoriously high cost of living, at $7,919.

The reasons are complex and some positive. Medical staff are better paid than in many other countries and administration costs are higher, making services more expensive across the board. However, good salaries help to attract and retain top health professionals.

Despite this the study revealed that access to healthcare is at a lower level than comparable peer countries. In 2015 (most recent figures) the Johns Hopkins School study found that there were 7.9 nurses and 2.6 doctors for every 1,000 people. The corresponding average figures in the developed world are 9.9 and 3.2 respectively.

The levels of investment in expensive equipment is higher too. For example the US is second only to Japan in the number of MRI scanners per head of population and third in the number of CT scanners (2016 figures).

Another factor that’s outside the control of healthcare organizations is the high price of drugs. Despite the current US administration’s stated intention to put controls on drug companies, pharmaceuticals clearly feel the political climate is ripe for pushing prices up.

Price rises averaging 6.3% were put on nearly 300 drugs at the beginning of 2019 with commentators expecting more in the coming weeks. That’s roughly 4% over the current inflation rate. It could be that prices are being pushed up so that when controls come in, they will be applied to a higher price base.

Keeping IT costs down

Part of the high administration cost comes from keeping up with technology – both in terms of technical medical advancements and general purpose computing equipment, for administration and management. It is believed that “new or increased use of medical technology contributes 40-50% to annual cost increases”.

Prevention rather than cure

Keeping data and network infrastructures safe from cyber threats is far more cost-effective and less disruptive than having to deal with the fallout from successful attacks. They cause excessive downtime for administrative and medical computer systems and take time and money to fix.

Nominet’s easy-to-digest infographic quantifies the threats faced by US healthcare organizations. It’s a one-pager with all the key statistics that support a case for investing in prevention from harm.

Get in contact with the team here, to discuss Nominet’s NTX cyber security platform, which spots and detects cyber threats before they can harm your organisation. 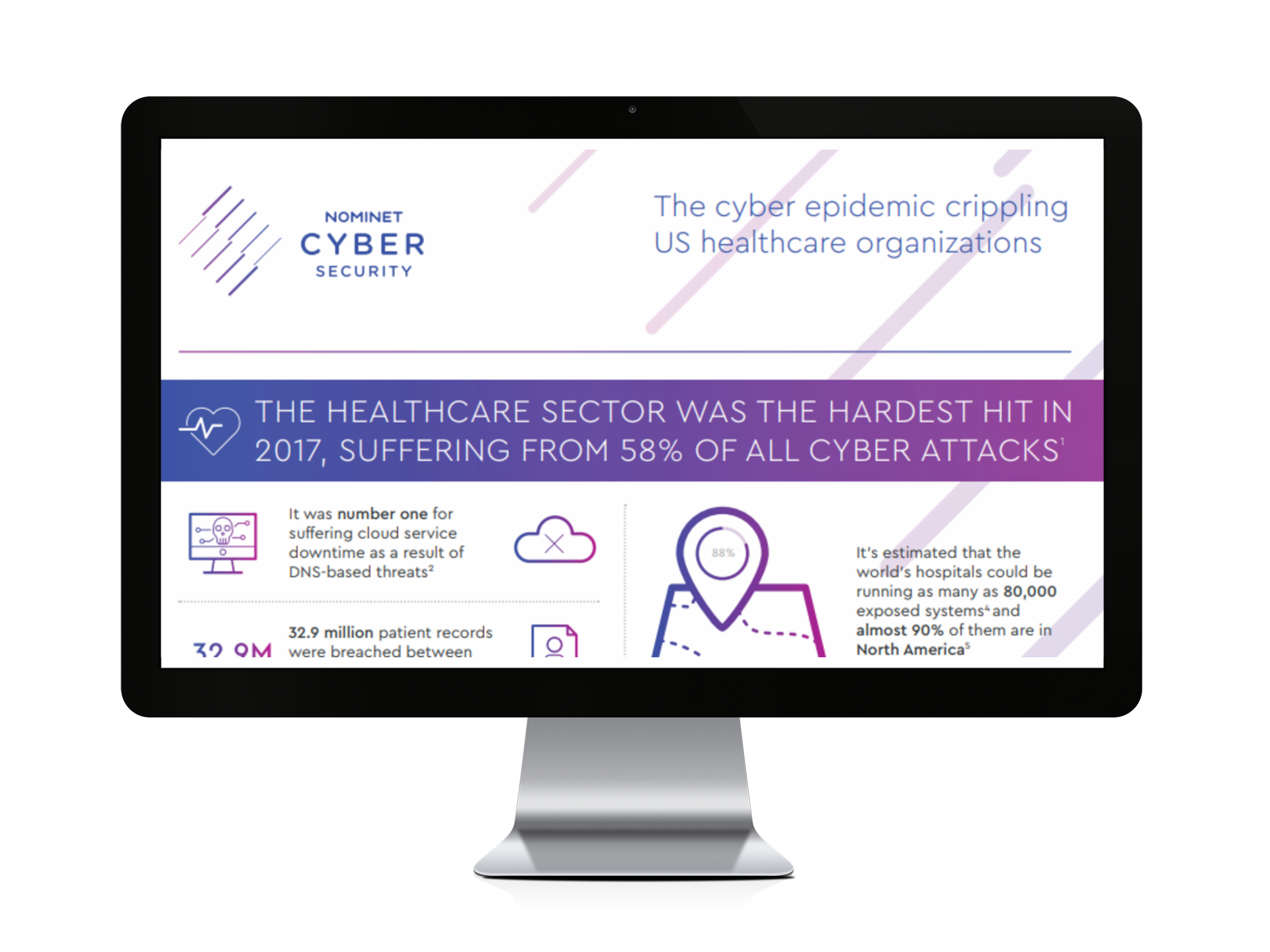