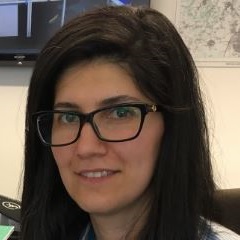 I am one of four children who have all grown up to work in engineering or technology. When I was about 12 years old, my Dad – who was a professor in hydrology – brought a computer home for us. Initially we just used it for games, but gradually I got curious about how it worked. I wanted to learn more about technology so that I could understand it all.

I’ve always wanted to have a job that allowed me see the impact of my work; I think that’s why I wanted to be a doctor when I was a child. My aunt was a surgeon and she would tell me about how happy some of the patients were after she had operated on them. Then I wanted to be an architect, but I was told it wasn’t easy to get a job in that profession.

I studied software engineering at university in my native Iran because my Dad persuaded me that it was important to get more women into technology and because he was also convinced it would give me a better chance of getting a job. It didn’t take me long to realise that software engineering was for me! I found it fascinating to be able to type in code and make something happen with just a few key strokes. After my degree, I did a Masters in Information Technology before moving to Finland to complete a PhD in Computer Science.

At university, I was often in the minority as a woman, but it never bothered me. If anything, I was glad. I would sit in the front row and be proud to be representing women and playing my part in trying to improve the gender ratios in technology. I’ve always worked in environments where there are more men than women, but it has never been a problem. My colleagues have always been supportive and kind, with the men seeming to make extra effort to support the women. I’m fortunate to have been steered into this field and been accepted wholeheartedly.

I was a STEM Ambassador for three years when I was working as a Researcher at the University of Liverpool. I received great support from my family to pursue a career in technology and so inspiring others to do the same seemed like a natural step. We used to go into schools to tell the kids about our jobs and then teach them some basic code as a taster. I hoped it would be just the nudge that they needed to feel confident in pursuing STEM subjects or a career.

I certainly noticed there was a difference between the way in which the girls and boys behaved around the technology we worked with in these sessions. When teenagers, the boys seemed more interested in coding and trying things out, while the girls lost interest more quickly. The girls tended to ask questions like “how does it feel to work in technology?” which made me think they were apprehensive about the experience of it. When we worked with younger children, there were fewer differences between the boys and girls; I think something changes when they become teenagers and we need to address that.

At Nominet, I predominantly work as a researcher on the connected autonomous vehicle (CAV) projects the company is involved in. I’m passionate about CAVs – they are going to change our lives and it’s great to be able to say I was a part of making it happen. Plus, no day is the same when you are working on problems that no one may have ever considered before, and certainly never solved.

I left academic research for Nominet because this job gives me a way to see the impact of my work. I loved working in universities, but too much of what we do there is hypothetical or using prototypes. At Nominet, I’m working on projects like DRIVEN, with real autonomous cars driving on real roads.

To do my job, you need to have critical thinking skills and be able to consider things in an analytical way. You need to be passionate about solving problems, be able to programme, and also be able to see the ‘big picture’ when it comes to problems. Communication skills are always important, as you have to discuss things with people – including colleagues who may not have similar technical understanding – and share ideas.

I love what I do, and I don’t regret studying technology at university rather than following my initial ambitions to be an architect. There are temptations in other countries, but I will stay in the UK for the time being as there are increasingly more job opportunities here, and I definitely want to stay working in CAV as it’s so fascinating! We’re on the brink of something very special and it’s great to be a part of it.