Mapping the new internet: A guide to the latest online neighbourhoods

We’re in the midst of an unprecedented expansion of the spaces available online. In previous years, choice of online address was restricted to a few after-the-dot options: .com, .net and so on, alongside country-code domain names like .uk or .de. Now, the options are theoretically endless — from .london to .luxury, .bbc to .blog. Over 1,000 have launched to date.

In recent weeks, we’ve seen the biggest land-grab so far for a new online neighbourhood. The right to run .web was auctioned off for $135 million (£102m), to a company called Nu Dot Co backed by Verisign, the company behind .com. This smashed the previous record more than three times over — in January, Japan’s GMO registry won .shop for $41.5 million. Third-place holder .app was bought by Google for $25 million in 2015.

Choosing a domain has always been about finding the right home on the web — selecting an address that will help boost your brand and give a sense of who you are. To help make sense of so many new options, we’ve developed a new take on the iconic London tube map using the top new domain extensions. Our map shows the 250 most popular[1] (by domains under management) new generic top-level domains (gTLDs), alongside some of the best-known brands who have opted to establish their own after-the-dot space on the web.

As in the real world, a particular locale evokes particular associations, whether City of London financiers, Harley Street medical practices or Oxford Street shopping. The ubiquitous .com lends authority to a global corporation. The country-code .UK lends trust to a British business. Now, new gTLDs offer more choice and specificity than ever before. As our map shows, a person or company  can choose to associate their online address with a geographic location (.london, .nyc, .wales), a profession (.lawyer, .media, .accountant), ‘lifestyle’ elements (.party, .yoga, .hiphop)… and many, many more.

Most demand for new gTLDs is coming from new markets in Asia. Data collected by domain trading marketplace Sedo suggests that currently 54% of all domain names with new gTLD extensions are owned by Chinese registrants. Research from ICANN, the global body that oversees internet domain names, has found growing awareness of new gTLDs among consumers worldwide. Surveying over 5,000 people across 24 countries, they found that 52% of respondents were aware of at least one new gTLD, compared to 46% last year. Awareness is highest in Asia (58%, up from 53% in 2015) and South America (59%, up from 54% in 2015).

A big space to watch in the coming years will be brand TLDs. As our map shows, many of the world’s most recognisable brands — .apple, .bbc, .bentley, .lego, .gucci, .sony, .youtube —  have secured their after-the-dot domain. For brands, the prospect of full control over their own territory on the web holds major appeal. Only they can decide what’s registered within their branded namespace. A .brand domain may also enable more snappy, memorable web addresses and creative marketing opportunities for different products, services and campaigns – news.bbc, drive.bentley, and so on.

They’re also likely to help with clarity and security. A .brand top-level domain can make it clear to customers that they are visiting or purchasing from an authentic website. For this reason, brands within the financial and banking industries could be keen adopters, given their emphasis on security and authenticity. Last year, Barclays launched .barclays and .barclaycard, on the basis that this allowed them to create “a simplified online user experience, making it crystal clear to our customers that they are engaging with a genuine Barclays site.” They may well be the tip of the iceberg in a wider move towards a branded ‘after-the-dot’ internet.

Like the London tube map on which our new gTLD map is based, the new gTLD landscape is likely to grow and change significantly in the coming years. (Compare a 1908 tube map with Harry Beck’s 1933 version and one today). We can guess at likely areas of expansion — whether they be growing markets in Asia or the rise of .brands — but it’s still early days. Being the internet, it’s likely there will be areas of innovation that no one has yet predicted. But given the huge growth in choice and opportunity, the domain landscape looks set to continue to be a vibrant and interesting space.

Click the image below to view the full map 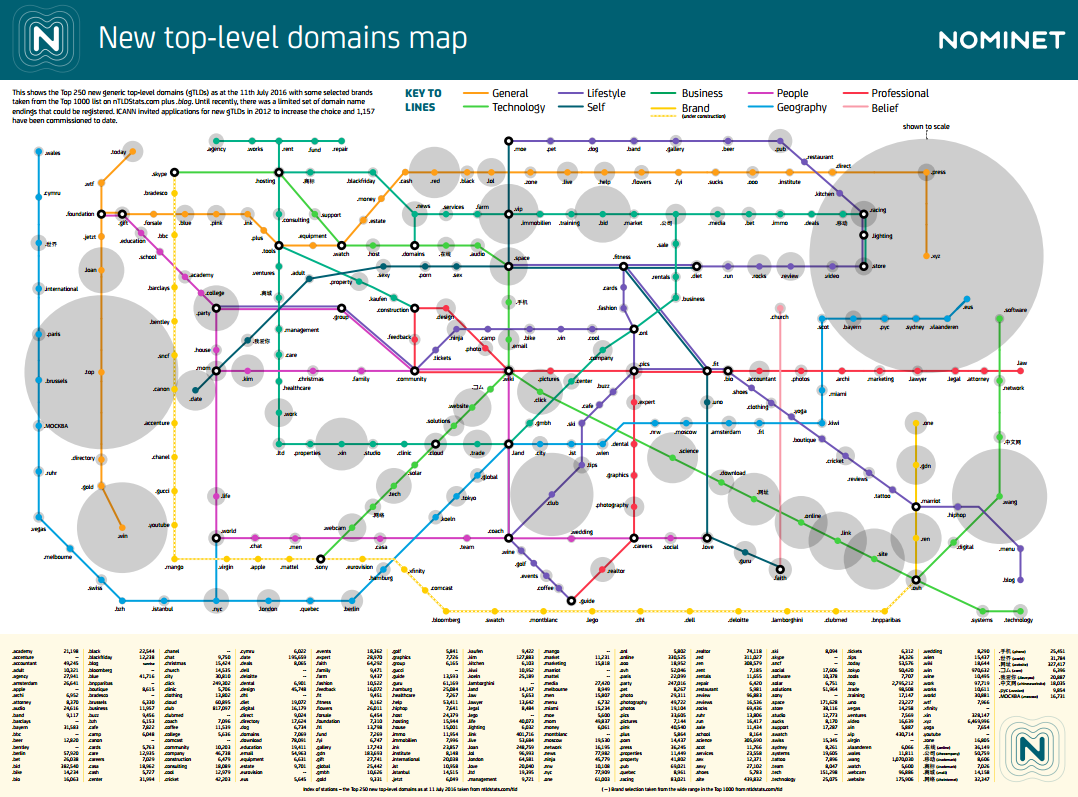