Eleven-year-old Izzy Kenny was thrilled with what she found out when ‘taking over’ the role of Head of Cyber Security at Nominet for the day in November; “it is such a cool job” she declares. “I’ve learnt about phishing and malware, and about how it’s a bit unfair that a hacker only has to find one way in, while you have to block every single way in.”

Izzy was one of thousands of youngsters who took part in the Children’s Commissioner’s Takeover Challenge, an annual event that puts them into real-life decision-making positions within organisations to the mutual benefit of both. While the young people gain insight into and experience of a workplace, organisations benefit from fresh perspectives and new energy from the workforce of the future.

This was certainly true for Cath Goulding, our Head of Cyber Security, and Izzy, who spent a Friday together tackling cyber security for the .UK domain. “I like the concept of keeping people safe, but its subtler than working with the police, where you can sometimes put yourself in harm’s way. Plus, cyber security helps the UK and the world a lot,” Izzy says.

For Cath, Izzy’s fresh take on the day to day was invigorating. “She thought about things in a different way and she was imaginative about the ways we could do things. It’s refreshing to have a new perspective,” Cath says.

It was also important for Cath to have a young female taking part in this Takeover Challenge, as she has long championed the need for more women to join what is a predominantly male industry. She is an active role model for youngsters considering the future, speaking at events such as the NCSC’s CyberFirst courses. “It’s said a lot, but that because it’s true: young people can’t be what they can’t see,” she says. 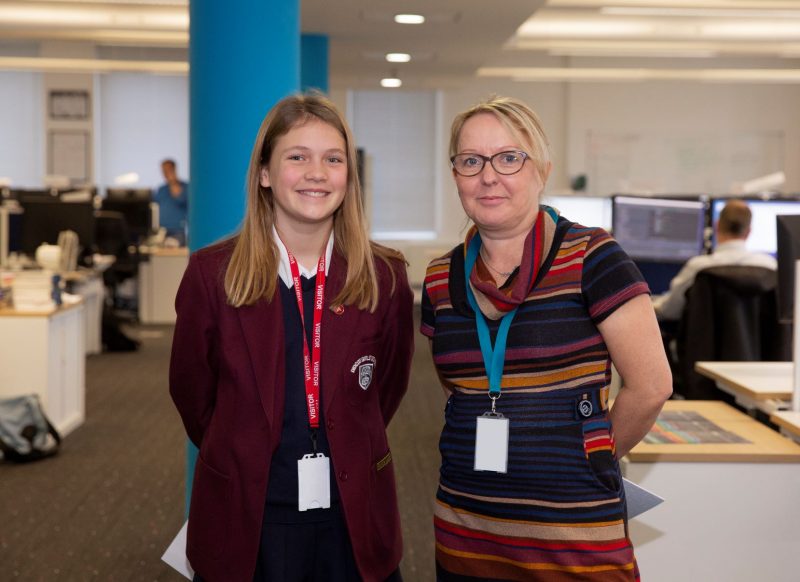 Fortunately, Izzy attends a school that actively works to promote STEM subjects and related careers to the students. At Didcot Girls School, the pupils are given regular exposure to visiting scientists and engineers and can access various STEM activities such as two science clubs. The school’s STEM Co-ordinator, Dr Lynn Nickerson, stresses that “all of these measures help ensure the girls are aware of the different options available to them to meet their interests and skills.”

The students also benefit from studying in a single-sex environment, where an absence of boys prevents the possibility of girls losing their confidence in STEM subjects – an issue that is believed to be partly to blame for the lack of diversity in these industries.

“Because we are an all-girls school our students can tackle any subject matter, skill development or area of developing responsibility, without any being thought of as more suited to boys or girls,” Dr Nickerson explains. “Girls also have the space to allow their intellectual and social confidence to blossom, discovering who they are and where they want to be in the future so that by the time they are choosing their A Levels or pathways beyond school, they are not fazed by stereotypes about STEM subjects being ‘for boys’.”

That said, only 10% of the Takeover Challenge placements sought from the school were in STEM-related industries. In technology specifically, the numbers would be even lower, partly because young peoples’ familiarity with tech doesn’t co-exist with an understanding of the industry nor the roles within it.

Izzy admits that “I didn’t really have any idea what to expect” of a role as Head of Cyber Security; “I didn’t know anything about it.” The school’s Head of Computer Science, Nathan Rees, is working to change that. “We run a coding club which has been set up by our Digital Leaders, and we are in the early stages of setting up a cyber security club which will allow students to enter different competitions.”

In addition, the school is also ensuring the girls have access to role models and different working environments within the technology sector, above and beyond their participation in the Takeover Challenge. “I am trying to arrange more visits to different companies,” explains Nathan. “We now have a Microsoft Ambassador, who will help us with this, and we have links to Sophos and Intel, where we will be running a coding competition.”

Izzy’s experience and the work of Didcot Girls School can serve as a microcosm of the wider efforts across the education sector and beyond that are trying to move the dial on diversity in STEM, and the technology sector in particular. There is much to be celebrated, and still some distance to travel, but this growth in awareness and concerted efforts are laying the groundwork for a more diverse workforce in the years ahead.

We mustn’t forget that young people are largely clean slates, willing to learn and be open-minded about the world around them. When asked whether it mattered that Cath was a female Head of Cyber Security, Izzy thought not, with a youthful disinterest in gender stereotypes. “I think women should have the same rights as men, so it’s fine that the Head of Cyber Security is a woman,” Izzy says. “More women need to be in that sort of role and doing that sort of thing – it’s important.”

Read more about Cath’s time at GCHQ or the diversity issue in the technology industry.