2018 has been and gone. We have emerged through the panic shopping and excessive eating of Christmas, and now ‘tis the season for reflection and consideration, a time for seeking insight from the past year to serve us over the one to come. For those of us in the domain name industry, it’s a moment to review the shape of the market and attempt to unpack what trends or changes of 2018 had an impact – and what might be coming next.

One prism through which we can (re)view the domain name market is our annual online map of the world. This unusual looking map bases the size of a country on the number of domains under management (DUM) for that nation’s country code top level domain (ccTLD). This results in unusual occurrences on an image we know well, such as a UK that is larger than the whole of Africa and a diminutive North America. 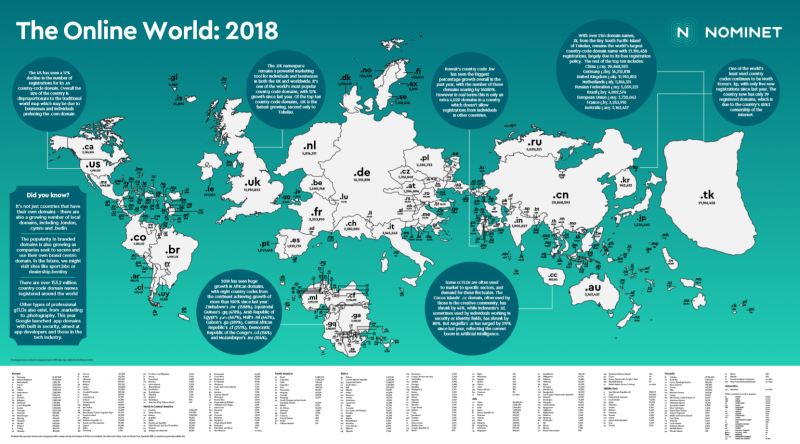 As the registry for the .UK domain, it was encouraging to find that our ccTLD remains one of the most popular in the world and was the second fastest growing ccTLD of 2018. We were beaten to both top spots – growth and size – by Tokelau’s .tk, a tiny Pacific island that is huge on our map.

This ccTLD has perennially been one of the oddities of the online world map, with a population of 1,400 but registrations exceeding 21m. Tokelau is a clear example that countries and their ccTLDs don’t always have much to do with each other. There are so many .tk DUMs because these were available free for a period, with no restrictions on registration.

We also see other small nations gaining disproportionately large amounts of DUMs because their acronyms match other industries or communities. For example, the Cocos’ islands’ .cc has been marketed towards the creative communities, while .tv or .dj appeals to those working in certain sectors. This tendency allows us to notice trends that are rippling across the world: 2018 saw Anguilla’s .ai surged by 219% since last year, reflecting the current boom in artificial intelligence.

The application of small ccTLDs beyond their geographical origins allows small nations to gain far more domains than they would otherwise be able to muster, but it can also cause issues. Recently, the tiny Pacific island of Niue sued the Swedish ccTLD registry to try and regain control of .nu. This domain has proved popular in Sweden, where ‘nu’ translates as ‘now’, and has almost 400,000 DUMs – quite a contrast to the population of Niue, which sits below 2,000.

That said, there are still some correlations between the journey of a nation or continent and the ccTLD. Africa is a fine example of this. The combined DUMs for the whole continent may be smaller than other areas of the world, but the past 12 months has seen enormous growth: eight country codes have grown by more than 100% this year, including in Zimbabwe, Mali, Egypt and Mozambique. This reflects the fact that Africa has seen one of the fastest growth rates in internet penetration across the world, according to figures from We Are Social and Hootsuite. From 2017 to 2018, there has been a 20% rise in internet users across the African continent, and clearly many of them are registering ccTLDs.

We also can’t help but mention China, which has been investing heavily in digital technologies this year and has a huge amount of .cn DUM to match their huge population. This ccTLD is the second largest in the world and surpassed 20m DUM in 2018. The Chinese are also attracted to generic TLDs (gTLDs), such as .vip, and 2018 has seen a steady stream of these being officially sanctioned for use within the country by the Chinese Government. China now accounts for almost 40% of all generic TLD registrations, and the expectation is that the country will continue to dominate the domain market, especially as there is money to be made in buying and selling domain names.

We mustn’t forget that the ccTLD figures represent just one part of the domain name market, and interest in new gTLDs continues to grow. This is in line with the increasing level of awareness about the potential of a domain name, not to mention a better understanding of the range of domains available beyond a .com or .uk. We can thank some of the world’s biggest brands for that, as marketing departments seek memorable domains to support promotional work. More exciting is the work of companies who have registered their own dot brand – such as .gucci and .barclays – and are making use of these to demonstrate the power of a unique domain name when it comes to brand recognition and flagging authenticity online.

So, what comes next? While no new gTLDs will appear in 2019, innovations and shifts will continue – such as MMX exploring blockchain technology with their gTLD .luxe – and the trends of the world are impossible to predict. The domain name industry is a changeable creature, but it does seem clear that interest in ccTLDs isn’t waning despite an increase in gTLD registrations, and the .UK domain remains a good place to be.

Find out more about Nominet’s Domain Solutions and learn more about dot brands.