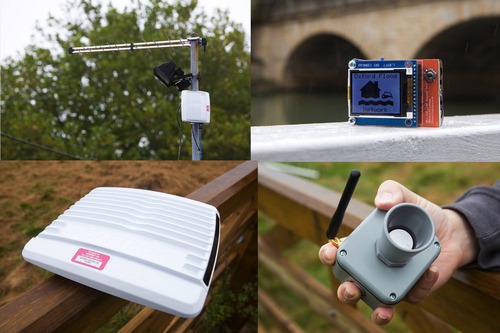 Nominet R&D are conducting some exciting practical experiments to support ongoing research in the fields of Internet of Things and TV White Space.

We are working with a small Oxford based company, LoveHz, to roll-out a flood sensor network around the streams and rivers of Oxford. Flooding is a real, too frequent issue in parts of Oxford, that affect many residents.

LoveHz’s unique angle on this is to apply the quickly evolving Internet of Things technologies to empower citizens to build their own local flood sensor networks in the areas that affect them the most. LoveHz have also created a low-cost open source flood sensor to sit on the network. In the Nominet R&D team we were really interested to hear about this work and decided to partner with LoveHz in making a first prototype network a reality.

In addition to this, we are also working on TV White Space technologies (we’ll follow up on a blog about this soon) and have created a TV White Space Database which qualifies for use in Ofcom’s TV WS trials around the UK. The R&D department wanted a real, useful, application to test this technology out on, and the Oxford Flood Network was a great match.

We are working with the fabulous people at Hogacre Eco-park, in South Oxford, and soon hope to have everything in place to allow a TV White Space connection between Hogacre and a site in the centre of Oxford. The location of the Eco-park is ideal for TV WS as it is just too far out of Oxford to have a wired Internet connection.

Additionally, it is surrounded on three sides by streams, all which can flood over after heavy rains. The streams exhibit some interesting behaviours at time of flooding (such as reversing flow direction) and it may very be that an early warning system can be constructed from behaviour patterns quantified by the sensors.

With a real demonstrator to work with we are looking at a number of tools and services that may be applied alongside the technology stack. In the next few months we hope to discuss these in more detail, along with some of the first results from the experiment and plans for further use of TV White Space in the Oxford area.