Wales One of Top Ten Most Popular European Geographic Domains

The domain names ‘.cymru / .wales’- are now officially among the top ten most popular European geographic domains for online business, alongside those for London, Berlin and Paris1. However, over one third (34%) of small businesses in Wales have yet to set up a website and so risk missing out on thousands in revenue as a result.2
Getting online with a professional website and .Wales domain name can boost visibility and trade potential for individuals and businesses alike. New research across 500 small business owners / decision makers, from a range of industry sectors across Wales found that:

Two early adopters of the Wales domain who are championing the importance of trading online is West Wales chocolatier, Nom Nom and national organisation, The Football Association of Wales.

Masterminded from a cowshed in Llanboidy in West Wales, Nom Nom, has grown quickly since it was established by Liam Burgess in 2011. It has amassed a following across the world with its creative flavours including Welsh cake, orange marmalade and waffle flavoured chocolate.

Helping him to spread the word about this distinctly Welsh chocolate is a distinctly Welsh domain name. Liam explains: “Investing in a Wales domain name two years ago has been a brilliant opportunity to communicate that we are from Wales and proud of it.  Since going online in this way our business gone from strength to strength and I would absolutely recommend that anybody making a product in Wales takes up a .cymru / .wales domain name.”

At the other end of the business scale, another organisation benefiting from a Wales domain is The Football Association of Wales (FAW). Last year was a big year for the organisation as the Wales national football team made its mark on the international football stage for the first time in since 1958.

To coincide with the teams’ success, the FAW relaunched online as www.FAW.cymru as Head of Public Affairs, Ian Gwyn Hughes explains: “We re-launched our website using .cymru to coincide with the 2016 European Championships. And as we now move forward towards the World Cup, people can see that we’re not just a small part of England.  We have our own identity.  I think using the .cymru domain extends the appeal of Wales and ‘Welshness’ and shows that we are a modern vibrant country. As an Association, we would recommend it to anyone.”

“There are many benefits of being online such as increased brand awareness and securing new business. Word of mouth and recommendations are great but increasingly potential clients want to ‘try before they buy’ and in many circumstances this means having a look at your website as part of their decision-making process. For those businesses who want to underline their Welsh connection or heritage, having a .cymru or .wales domain name is the perfect way to demonstrate their Welsh credentials to the world.”

Jayne Kendall, Wales Product Manager at Nominet said: “Many business owners assume that running a website is complicated and expensive but this is no longer true. It is now very easy to set up professional-looking website due to improvements in web-based tools and apps for building a website. The days of needing to pay a website designer or having a specialist knowledge in coding are gone.  It’s also very affordable, with website builder and hosting packages giving businesses a platform to reach millions of potential new customers for as little as the cost of a cup of coffee each month.” 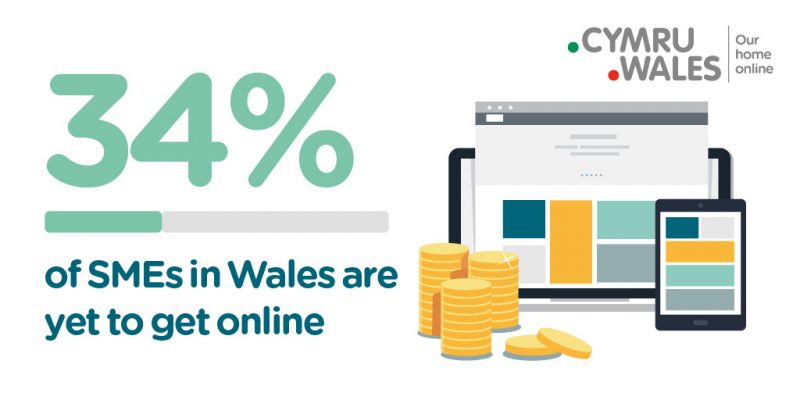 3 Value arrived at by working out the median figure tradespeople with a website say they receive per job (on average) from their website and multiplying it by the average number of extra jobs they are getting as a result of having a site.

4 There were 125 respondents within the Construction sector from across 25 trades, only 65 of these had a website. Specialists were more likely to have a website such as the following trades: security specialists, swimming pool specialists and bathroom specialists. Examples of trades without a website included: roofers, tilers, plasterers, stoneworkers and painters/decorators.