I should start by saying that I’m not a crypto expert, just an engineer who needs to understand enough how something works in order to be able to use it effectively. So, this is written with the intention that it’s explanatory rather than reference material. The benefit of this is that this article is maths-free (I won’t mention the Discrete Logarithm Problem): keep reading!

I want to be able to do security properly, but for IoT applications RSA keys are rather large and hard to handle. To save power, I would rather transmit as few bytes as possible over a radio link, and larger data can cause buffer size problems, or not fit into a single network packet. ECC has much smaller key sizes, and should improve this.

How much smaller are ECC keys?

This is a subject that can cause endless discussion, but we need to start somewhere: To give an idea of the difference, a 256-bit ECC key can be considered equivalent to a 3072-bit RSA key. ECC keys are much smaller than RSA keys.

Why do I care how it works?

It can be tedious to get crypto to work at all; any mistake and it is very hard to debug—this is one of many good arguments for using existing libraries. However it can be hard to get the output from one library/platform/language to work with another. For an IoT application, you’re unlikely to be using the same library on your embedded device as on your cloud server.

This isn’t trivial even with secret key encryption; for example one library uses an AES key as you supplied it, another hashes it first. And then there are many padding schemes, etc. We can expect ECC to be harder.

I need to be able to understand the steps that the data goes through, to have a chance of being able to debug any integration problems.

I feel that I’ve got a working understanding of RSA en/decryption; generating a secret key based on a pair of large pseudoprimes, and a public key from their product. Then doing encryption by modular exponentiation using the public key, or a signature using the private key. The message isn’t directly encrypted using RSA, instead a temporary secret/symmetric key is generated and used to encrypt the message; this key can be efficiently encrypted using RSA and transmitted with the message. Decryption or verification simply use the opposite key than the original operation.

In my mind, I think of RSA having primitives; keygen, encrypt, decrypt, sign, verify. (Or maybe just; keygen, do_modular_exponentiation.)

ECC is more different than I expected

Looking at the interface to my ECC hardware, or software library, I find it supports a different set of primitives than I expected; keygen of course, and I can see ECDSA Sign and ECDSA Verify, but the only other operation is ECDH (Elliptic Curve Diffie Helman). There is no encrypt or decrypt operation!

ECC encrypt is not a primitive operation. Instead we can use ECDH (Elliptic Curve Diffie Helman) to generate a shared secret, and use this as a secret key. This is called ECIES (Elliptic Curve Integrated Encryption Scheme).

The descriptions you’ll find of ECIES may well be correct, but I didn’t find them immediately useful. I drew a diagram to understand it, and here’s a tidied-up copy of it. 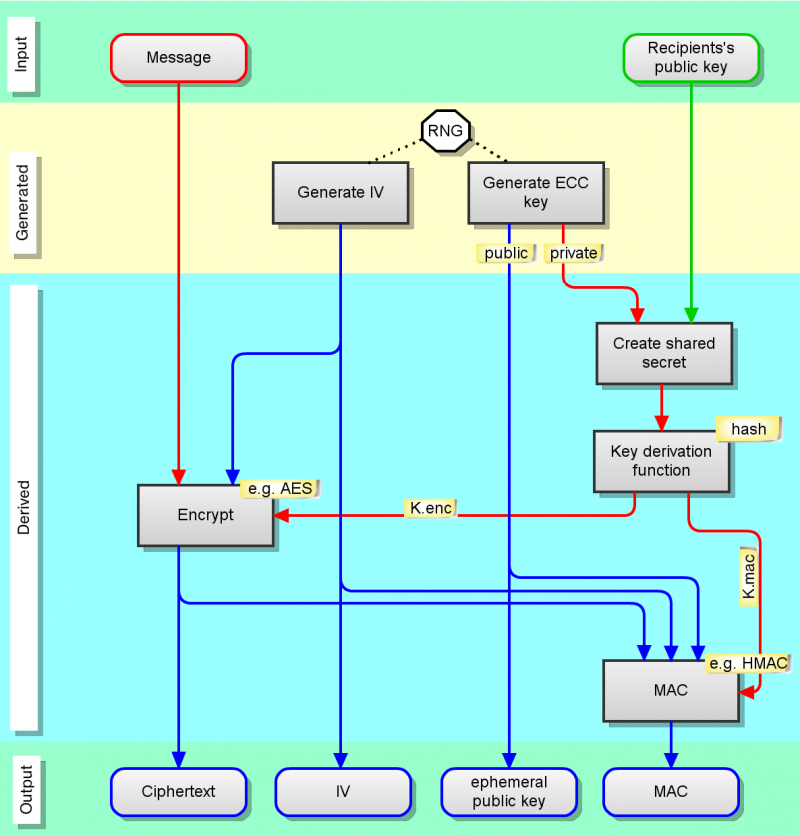 Having drawn & redrawn the diagram for this post, ECC encryption now seems a lot clearer to me than when I started. If you’re wondering why I bothered to write this, then that’s a success.