On Wednesday 18th April 2018, the DRIVEN consortium demonstrated publicly for the first time the capabilities of its fleet of autonomous vehicles to interact and ‘talk’ to each other. From its headquarters at the RACE Building at the Culham Science Centre in Abingdon, DRIVEN set two of its vehicles, a white and blue 2014 Ford Fusion Titanium hybrid and a 2017 Ford Mondeo hybrid on the roads to show assembled media the latest milestone in the project.

Using their array of lidar sensors, on board computers, and cameras, as well as Oxbotica’s Selenium autonomy and Caesium fleet tracking software, the cars were able to navigate the site autonomously, encountering pedestrians, cyclists and other traffic. Other consortium members Telefonica and Nominet, were on-hand to explain how the DRIVEN consortium is managing the security of this data to protect drivers and other vehicles from cyber security threats.

Speaking on the significance of the occasion, DRIVEN project director and Oxbotica CEO Dr Graeme Smith said: “This is a significant landmark in the development of vehicle autonomy, which has always been about more than simply self-driving. This public trial demonstrates that our technology is able to share data and information that vehicles are then able to use to plot more effective routes, avoid potential hazards, and anticipate conditions more effectively. This will have huge implications on the way autonomous vehicles will operate and how the future of road travel in the UK looks, improving safety, efficiency and productivity.”

Also commenting, Prof. Paul Newman, co-founder of Oxbotica and Director of the Oxford Robotics Institute said: “This demonstration shows once again that the UK is at the forefront of the next generation of travel, and that our expertise is second-to-none at a time when the country is looking to develop global trading links We hope and expect that the technology that DRIVEN is developing will be adopted by vehicle manufacturers all over the world as the first wave of autonomous vehicles, as the public imagines them, comes to market. Our work on display here today could revolutionise people’s lives, and the UK will get to share in an industry that could be worth billions in the years ahead.”

Russell Haworth, CEO, Nominet said: “For autonomous cars to run safely and effectively, the correct framework must be in place, and so our role in DRIVEN is to increase and strengthen the understanding of data flow, sharing and security within the backbone digital infrastructure. Our work addressing infrastructure challenges will help ensure the UK is at the forefront of this exciting field.”

DRIVEN, which is in receipt of an £8.6 million government grant designed to stimulate the development of new technologies, is an ambitious project that will see a fleet of Level 4 autonomous vehicles being deployed in urban areas and on motorways, culminating in multiple end-to-end journeys between London and Oxford in 2019. By operating at Level 4 autonomy a vehicle has the capability of driving itself most of the time without any human input.

DRIVEN’s fleet of vehicles can currently be seen conducting urban trials around the streets of Oxford. By Q3 2018 the fleet will be six-strong. The wide-area road testing of the fleet is due to start in late-summer 2018 across a range of environments including low-speed urban and higher speed long distance motorway driving.

A key opportunity for the consortium and one of its members, global re/insurer XL Catlin, is to create a risk assessment tool to enable the user of the autonomous vehicle to make decisions about what level of autonomy and speed is appropriate for a wide set of driving conditions, and a new insurance proposition for autonomous vehicles. By 2019, the consortium plans to have developed a risk assessment tool that automatically processes a range of data from both the vehicle and external sources that surround it, for example traffic control systems. 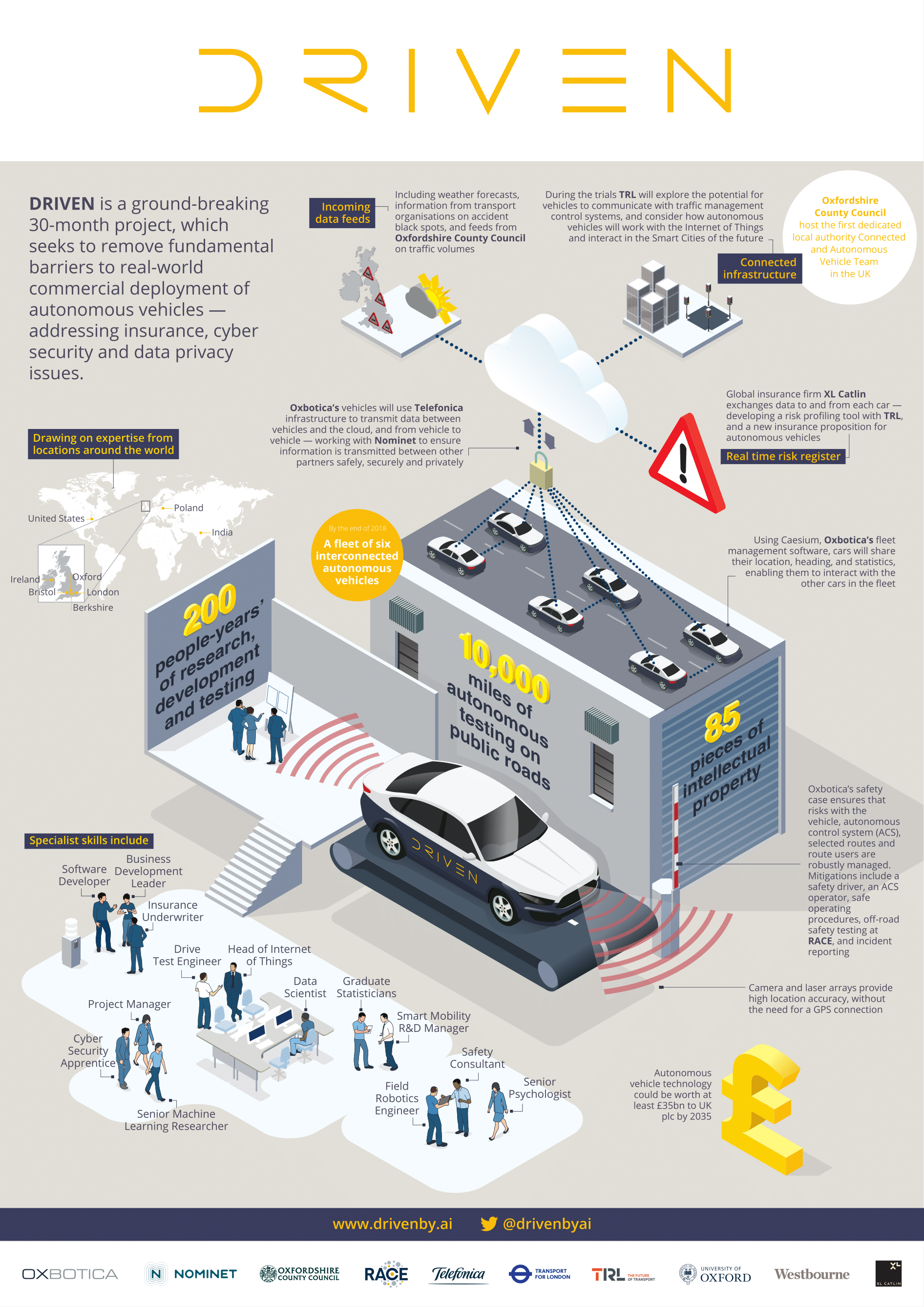 DRIVEN is a consortium of British companies, led by Oxbotica, and enabled by the UK Government.

DRIVEN is jointly funded by government and industry, having been in receipt of an £8.6m grant from the government as part of its £390m Industrial Strategy Challenge Fund. This fund is administered by the Centre for Connected and Autonomous Vehicles (CCAV) and delivered by the UK’s innovation agency, Innovate UK.