As we mark International Women’s Day 2022, it’s important to reflect on how we have passed an inflection point, no longer debating whether closing the gender gap is a good thing but focusing more on how we achieve it. As a society, we have realised that gender equality is something that is going to benefit everyone. The world of technology is a good example.

In the last 30-40 years, the digitalisation of the world has seen the number of internet users around the globe rise from 2.8 million in 1990 to 4.54 billion in 2020, a figure which equates to 59% of the world population. Digitalisation is everywhere, either pervading or enhancing all our lives depending on your point of view, but it affects us all. So we might ask why is there such a significant gender imbalance within the technology industry when technology is equally important to the lives of both men and women? 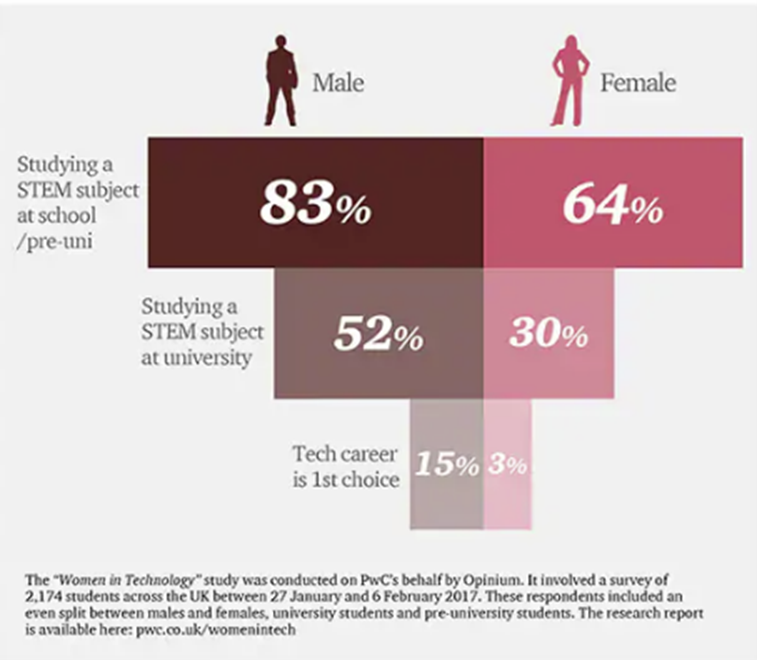 *Used with permission from PwC

Achieving gender equality at work is not always an easy fix. There are many elements that need to combine to make it happen, such as encouraging a higher percentage of women into the workplace and making sure there are good support systems for parents. It’s also about having positive role models in industry and in society as a whole, from politics and media to art, culture and sport.

Research tells us that just 3% of females in the UK say a career in technology is their first choice, and that only 16% have had a career in technology suggested to them compared with 33% of males. There seem to be complex reasons for this gender gap, starting in the early years of school when girls are not encouraged in STEM subjects the same way as boys are, to female students being put off a career in technology as they believe it is too ‘male dominated’, and the perceived lack of female role models reinforcing the idea that tech is not for them.

When talking to women about their careers in tech, and this applies to some of the conversations inside Nominet, it’s surprising and telling how often phrases like “I fell into tech”, “My route into tech wasn’t straightforward”, and “I never thought tech would be my focus”, come into play. Yet there are a growing number of women enjoying a career in the tech industry and would recommend it to others.

As we come together to celebrate International Women’s Day 2022 this week, with its theme #breakthebias, meet four Nominet women who share their personal experiences in tech.